As a first time owner of a ZX-Spectrum computer, I am diligently learning all I can about the system, available software, and add-on components. To truly appreciate the computer, I decided it best to become immersed in how using the machine day-to-day would have been in the 1980's. As a young person living in the US, I had never seen a Sinclair computer, and doubt that I had even an awareness that it existed. At school and at home I used Apple II computers, all of which had been equipped with floppy disc drives. While I knew that some of friends had Commodore machines at home with tape drives, I had never spent any real time experiencing loading software from cassette tapes.

Tape Media in the modern day

When I purchased the ZX-Spectrum machine on E-Bay during my London trip, I purposely selected a +2B model because of the built in tape deck, but also the particular item shipped with a generous starting collection of tapes (see image) 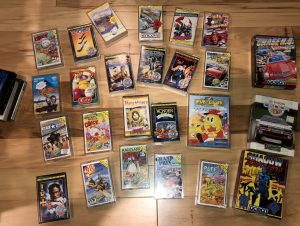 . I knew this would give me a jumpstart on a games library, but also allow me to experience using a tape-based system to load, save, and run programs on the device. It has been many years since I have used a cassette tape. CD's and later MP3's have all but replaced magnetic media. Vinyl has made a comeback in recent years, however, I am skeptical there will be a lot of nostalgia for tape decks. Tape media is also vulnerable to damage and wear. If you grew up listening to music on tapes, you are also familiar with using a pencil to re-spool a tape that was ejected from the player like spaghetti from a strainer. You also might recall that a magnet can erase and heat can warp the tape. Because the player is mechanical, the rotating spoolers can slow or become out of sync. I can go on and on about the flaws and failures of cassette, but in short reliability inevitably suffers. In this case, loading time from tape is the one area where I found the Spectrum to be deficient. Loading from floppy stirs memories of listening to the clacking, whirring, and disc spinning inside the drive, and ever so often glancing at the blinking LED. Watching the scroll bars and listening the tones emit from the speccy seemed to take an eternity compared to the waits for King's Quest levels to load, or Lode Runner on my Apple II . I will admit, there was something initially exciting about pressing [Play] and anticipating the program to start, but this quickly turned into boredom and frustration. ## DivMMC

Enter the DivMMC Enjoy! PRO ONE expansion card for the ZX Spectrum. Developed by ByteDelight, this easy to install, plug and play device completely transforms the way you load, save, and run programs. Utilizing an SD Card formatted for the ESXDOS, you can load tape images and other loadable rom files quickly, using a menu driven UI. Programs load lightning fast, no more waiting, no more loading noise. Another major benefit to the expansion card, is the addition of two 9-Pin joystick ports which work out of the box, but are also configurable. Having this option essentially turns my recently constructed adapter box into a useless paperweight. I now have the ability to connect the Atari joystick as a Kempston controller directly to the spectrum. ## ZX-HD

In addition to upgrading the storage capability, I also opted to improve the graphics output using the ByteDelight ZX-HD expansion card. The ZX-HD provides the clearest possible picture quality you can output from a Spectrum Using a unique way of harnessing a Raspberry Pi Zero's HDMI port, you simply connect the computer directly to a TV or Monitor using an HDMI cable. In addition to simply better quality display, the ZX-HD also adds ULAPlus, a capability which provides supporting games to use an expanded palette of 64 colours. There are more details about this capability here on this ulaplus information page. The expansion card on the ZX-HD allows you to daisy-chain the DivMMC onto it, so both devices can work simultaneously. The picture quality does not disappoint. I had recently purchased and reviewed the RGB-> SCART cable from Retro Computer Shack. This cable is excellent in construction quality, provides a great looking picture and works flawlessly using the RGB port on the computer. That said, the HDMI output is superior and provides the additional capability of the ULAplus that the RGB cannot. ## Purchase Experience

Note, this is not a paid advertisement nor endorsement. This is an honest review, and I purchased these items with my own money.Anytime you order something from an independent store, particularly using international mail, there is always that worry of the item not arriving, or something else happening. Then information provided by ByteDelight's online store was thorough and informative about the individual products. I had watched another reviewer on youtube assemble his ZX-HD and DivMMC, and also read about the devices in several other places. Several days went by after I placed the order, and I did not receive any updates. I decided to wait one more day before contacting, but I did not need to. Ben had sent me a note with the tracking information and a short apology for not sending it sooner. I thanked him and sure enough, the item arrived about two days later, earlier than what the tracking service indicated. I am very pleased with the communication, quality of the packaging, and the shipping box. Each component was individually boxed, and the electronics placed in anti-static bags. Instruction sheets were printed in color and were clear, concise and easy to understand. ## Conclusion

In summary, I am continuing my exploration of this wonderful computer from the 1980's. Having these modern upgrades has enhanced my experience and given me a great respect for not only the original hardware and software developers, but also those fans and makers willing to keep the legacy alive with modern upgrades. I will continue exploring and releasing more videos and articles about the ZX-Spectrum in the months to come. You can watch the video version of my review here: ## Video